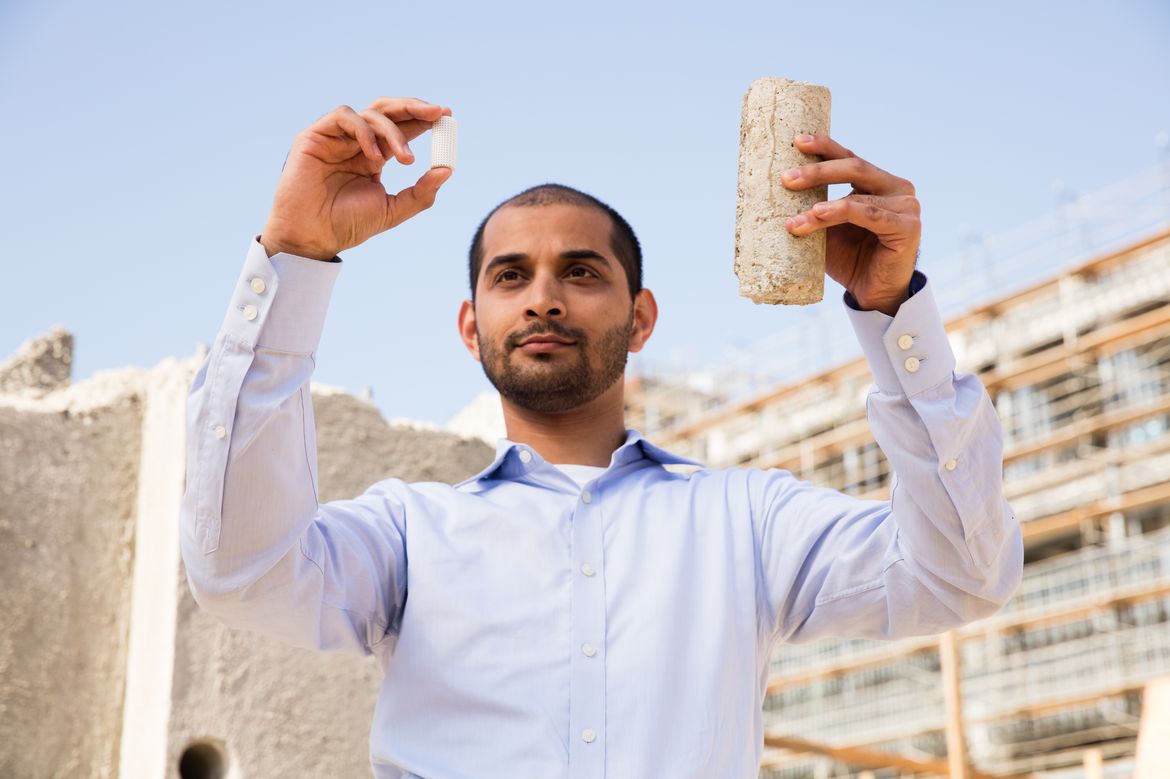 This article was originally published in UCLA Newsroom

A group of UCLA engineers has become the first university team to win the grand prize in the NRG COSIA Carbon XPRIZE global competition. By mitigating the carbon footprint of concrete, the team’s invention could eventually be a major step in the global battle against climate change.

The UCLA CarbonBuilt team, led by Gaurav Sant, a professor of civil and environmental engineering at the UCLA Samueli School of Engineering, won $7.5 million in the competition’s track for technologies related to coal-fired power generation.

The winning technology is a first-of-its-kind, eco-friendly approach for taking carbon dioxide emissions directly from power plants and other industrial facilities — emissions that would otherwise go into the atmosphere — and infusing them into a new type of concrete invented by the team. As it hardens and gains strength, the specially formulated concrete permanently absorbs and traps the greenhouse gas.

Through extensive research at UCLA and testing at the Integrated Test Center, a facility outside of Gillette, Wyoming, the researchers demonstrated that their process reduced the carbon footprint of concrete by more than 50% while producing concrete that was just as strong and durable as the traditional material.

Each CarbonBuilt concrete block stores about three-quarters of a pound of carbon dioxide — a significant amount considering an estimated 1 trillion concrete blocks will be produced annually by the year 2027. 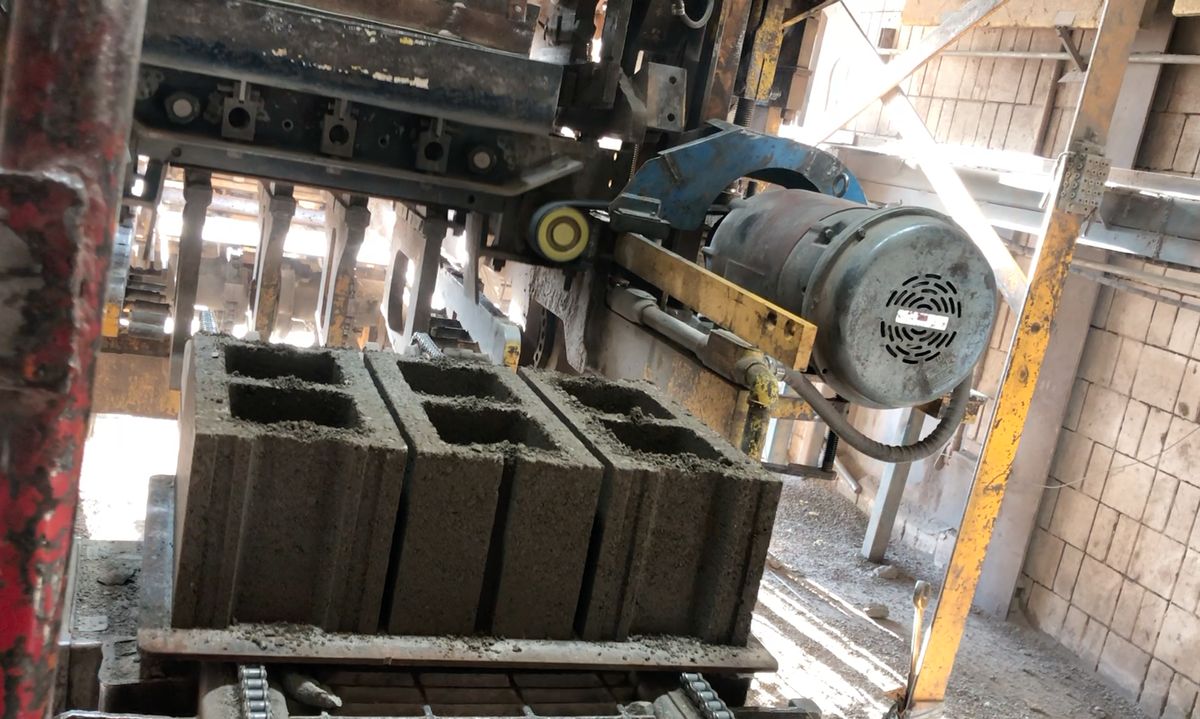 Sant joined the UCLA faculty in 2010. He and a group of staff scientists, postdoctoral scholars and doctoral students began the research that led to the award in 2014.

“I am absolutely thrilled that CarbonBuilt has won the NRG COSIA Carbon XPRIZE,” said Sant, who directs the UCLA Institute for Carbon Management and also holds a faculty appointment in the UCLA Engineering materials science and engineering department. “As a third-generation civil engineer, I have been fascinated with the role that construction has played in solving societal challenges. To have spent the past decade developing a solution to mitigate the carbon footprint of concrete with a phenomenal team, and to have won the NRG COSIA Carbon XPRIZE doing something I’m passionate about is an ultimate dream come true.”

UCLA’s entry was one of 47 submissions from 38 teams in seven countries. CarbonBuilt, formerly known as CO2Concrete, was named one of the 10 finalists in October 2017.

Sant said the original inspiration for the winning technology came from an unlikely source: seashells.

“Seashells are made of calcium carbonate, which is nature’s original cementation agent,” he said. “We were really motivated by the idea of how seashells were held together. And that’s how we really set about to turn carbon dioxide into concrete.”

Challenged by experts in academia and industry who said it couldn’t be done, Sant and his team spent the next seven years on a mission to prove them wrong. 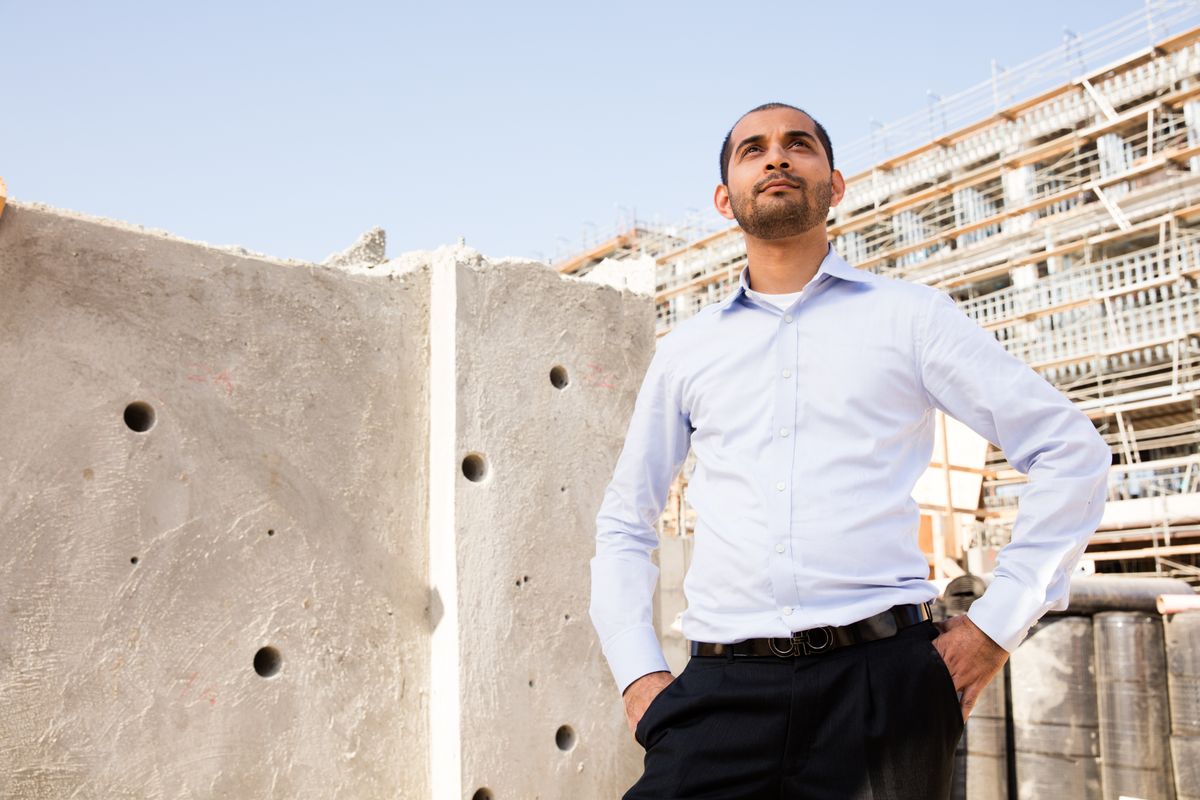 Gaurav Sant: “To have spent the past decade developing a solution to mitigate the carbon footprint of concrete with a phenomenal team, and to have won the NRG COSIA Carbon XPRIZE doing something I’m passionate about is an ultimate dream come true” (Image credit: UCLA Samueli School of Engineering).

First, the UCLA researchers developed a new formula for cement, which is the binding agent in concrete. They used hydrated lime, or portlandite, which can absorb carbon dioxide quickly, to replace traditional calcium silicate cement, known as ordinary portland cement. Then, the team created a method in which carbon dioxide taken directly from flue gas is quickly absorbed by portlandite as the concrete hardens.

In addition to absorbing carbon dioxide into the concrete, CarbonBuilt’s Reversa process reduces the amount of ordinary portland cement needed to produce concrete by between 60% and 90%. The process also occurs at ordinary temperatures and pressures. As a result, CarbonBuilt concrete has a much smaller carbon footprint than conventional concrete. That could go a long way toward reducing the world’s greenhouse gas output, since the production of traditional cement used in concrete is the cause of nearly 9% of the world’s carbon dioxide emissions.

Another compelling advantage of the new technology is that it is cost-effective. Unlike other carbon-mitigation technologies that require an expensive setup to capture the carbon dioxide emissions or purify them, the CarbonBuilt process allows for carbon dioxide in power and industrial plants’ flue gas to be utilized directly and converted at its source without those extra steps.

“It’s a transformative, eureka moment for UCLA and for science and engineering,” said Jayathi Murthy, the Ronald and Valerie Sugar Dean of UCLA Engineering. “Through sheer tenacity and determination, Gaurav and his team were able to turn a research project into an innovative technology that can solve a real societal problem and drive positive change in the world.”

To advance to the finals, the UCLA researchers demonstrated that their technology could consume 135 kilograms (about 297 pounds) of carbon dioxide in 24 hours. In 2017, the team had to meet certain technical requirements, subject to verification by an independent firm. Those results were then evaluated by a panel of expert judges from academia and industry who assessed the amount of carbon dioxide that was converted into CarbonBuilt concrete, as well as the engineering, environmental and economic value of the construction material.

Originally scheduled for February 2020, the competition’s final round was postponed due to the COVID-19 pandemic. In June 2020, the UCLA team deployed to the Integrated Test Center to demonstrate its system on an industrial scale. The demonstration ran for four months and produced nearly 150 metric tons (more than 330,000 pounds) of CarbonBuilt concrete blocks. Some of the concrete blocks were donated to the Eastern Shoshone tribe for housing projects on the Wind River Reservation in Fort Washakie, Wyoming.

The funds from the NRG COSIA Carbon XPRIZE award will support innovative carbon-mitigation research and technology development at UCLA Engineering. CarbonBuilt, which is a private company founded by Sant, has secured rights related to the project’s patent portfolio owned by UCLA to commercialize the technology.

Prior to winning the grand prize, the team has raised $10 million toward the development of the CarbonBuilt technology. In addition to a $500,000 award from the XPRIZE Foundation in 2018 for reaching the finals, Sant secured a $1.8 million grant in 2019 from the Department of Energy. (Additional testing to complete the DOE grant recently concluded at the National Carbon Capture Center in Wilsonville, Alabama.) And the Anthony and Jeanne Pritzker Family Foundation contributed $1.5 million in 2017.